On the Episcopal Church being sanctioned by the Anglican Primates

On January 14, the Primates of the Anglican Communion meeting in Lambeth, England, voted to sanction the Episcopal Church for allowing for same-sex marriage throughout the church.  You can see the specific language of the sanctions in paragraphs 7 & 8 of this document.

Here is the statement I wrote for the January 14 edition of Trinity Cathedral's enews:

There is breaking news from England.  As many of you know, the worldwide Anglican Communion is made up of 38 different autonomous provinces.  Each province is led by a primate; ours is our presiding bishop, The Very Rev. Michael Curry.  The Primates are meeting in London this week.  There has been tension in the Anglican Communion over the move toward acceptance of people who are gay and lesbian in some provinces.  There are several provinces who have moved toward inclusion, but The Episcopal Church seems to draw the greatest attention.  The primates have just voted to place a minor sanction on the Episcopal Church for three years.  We can not represent the Anglican Communion on ecumenical and interfaith bodies, we cannot be appointed or elected to serve on committees internal to the Anglican Communion.  Episcopalians who are already serving on such committees are not to vote on issues pertaining to doctrine or polity.  Since these committees don't govern doctrine or polity, this last sanction doesn't mean much.

While I will likely write a reflection on this after I have a chance to study the situation more, I would like to offer a few initial thoughts. First, our move toward marriage equality was the result of 40 years of hard, painful, prayerful and careful engagement with scripture and one another. I, and others who worked on this issue, firmly believe this is God's call to us, and that we are called to be a witness to the full dignity and inclusion of people and couples who are gay or lesbian. If we have to pay a price for this stand, then it is a price we willingly pay. That said, it isn't much of a price to pay.  This is not a very big deal in terms of our relationships with Anglicans around the world. Our real connection with the worldwide Anglican Communion is in our partnerships in mission on the local level.  Those will continue unchanged.

When reading this statement sanctioning the Episcopal Church, it is easy to react out of anger or fear.  I sometimes need to remind myself that Christ's love casts out fear. Our call is to love.  Love those sanctioning us.  Love the gay and lesbian persons who continue to be subjected to hatred and violence, who will see this statement as another spear in their sides.  Love and pray for one another.

The following day I received a phone call at 5:30 in the morning from a reporter from the Guardian newspaper in England.  She didn't realize I lived on the West Coast.  I am not one of those people who wakes up at 5:00am so I was sound asleep.  We had a little chat that I can't remember.  I was pleased that in the article she only quoted my coherent speech.

The following week I had many, many members of the Cathedral come talk to me.  They were upset at the actions of the primates.  On Sunday, January 24, I had the opportunity to address their fears in a sermon.

After a series of terrorist attacks and Donald Trump's pledge to bar Muslims from entering the U.S., members of Trinity Cathedral and Sacramento decided to stand in solidarity with our friends at the Salam Center. They hosted a unity rally that was packed. I was blessed with opportunity to join with other religious leaders and speak for tolerance.

We also launched an interfaith Habitat for Humanity Project that we hope will become a national trend. People of various faiths, and no faith, are joining with area Muslims to build two Habitat homes. One will be sponsored by Muslims and the other by the interfaith community.  This project was put together in a little over a week.  Bishop Barry Beisner and seven Sacramento area congregation have pledged their support for the project.

Trinity's vestry decided to put a statement of support outside the Cathedral.  I proposed the wording to the congregation and got good feedback. Here's the sign we posted: 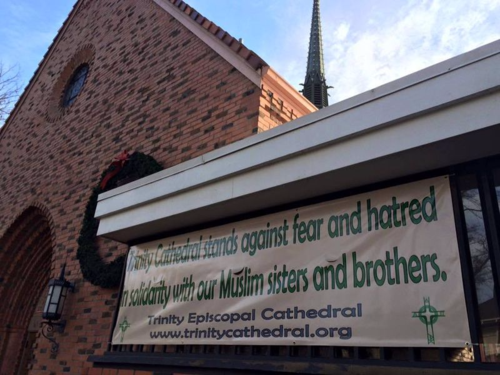 Here's the sermon I preached after the attack in San Bernardino: