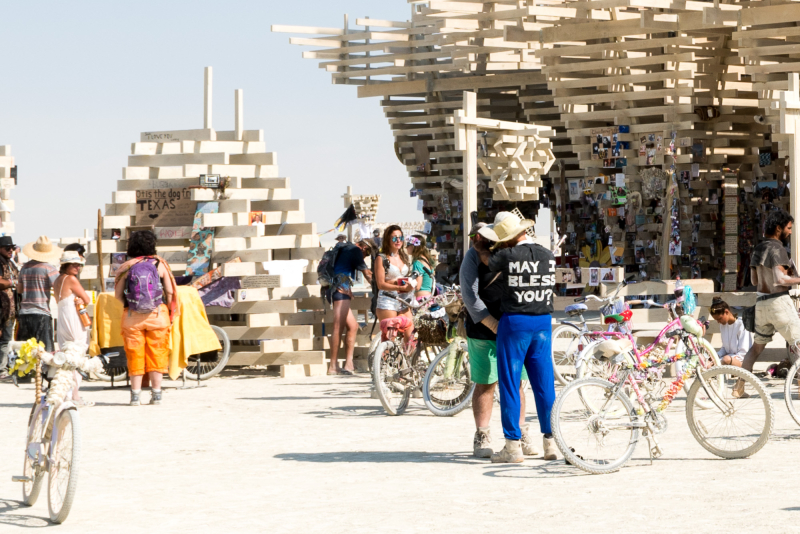 “Do you use cannabis?” This is a question I have never been asked.

Except at Burning Man.

Burning Man has a gift-giving economy - not bartering, rather, gifts freely given and freely received. You might be riding your bike, then turn a corner and be greeted by someone in the street asking: “Do you want an omelet?” ”May I give you a massage? Even: “Hungry for a strap-on corn dog?”

The question is always part of a loving exchange, a request for connection, or communion.

As I was tearing down my camp after Burning Man 2017 a tall, thin, young white man with long blonde hair came by and asked if he could borrow my rake. We rake our campsites to make sure we aren’t leaving behind MOOP (Matter Out of Place). The rake sifts through the dusty dust and reveals tiny pieces of trash. I had forgotten my rake so I couldn’t help him, but we ended up having one of those chance conversations that make Burning Man so special.

He asked, “How will you be different when you go back to the Default World? How has this Burn impacted you?” I was moved by the depth and sincerity of his questions, and after answering them, I offered him my gift, the Burning Man Blessing.

I placed my hands on his shoulders, looked in his eyes and said, “The world now is too dangerous, and too beautiful, for anything but love.” Then I blessed his eyes, ears, mouth, hands and feet – kissing his feet. I placed my hand firmly on his chest and said, “And may your heart be so opened, so set on fire that your love, YOUR LOVE, changes everything.” His eyes welled with tears.

We hugged. He sobbed.

Then he asked me The Question,

“Do you use cannabis?”

We parted ways. I tore down more of my camp and then took a break to explore more of the Playa – the dry alkalai lakebed that houses Burning Man.

Hours later when I was back at camp the man returned. He was eager to see me. He pointed to the banner on my shade structure bearing the name of my camp, Religious as Fuck, and asked,

“Is that true, are you religious?”

A big smile crossed his face as he exclaimed, “Wow, you just restored my faith in religion!”

And then he went on his way.

This man was eager to ask his question. I could tell he was hoping the answer was going to be yes . So many people have had bad experiences with religion, but haven’t given up hope—they yearn for the church to look like Jesus: loving, welcoming and compassionate. All it took was acceptance and a blessing.

Sometimes it is that simple .

This past week I was wondering what it looks like to pay homage. I understand conceptually what adoration toward God is about, but how can I talk about it in tangible, incarnational ways? How do we exercise the muscle of adoration, awe and homage?

The reason I was thinking about homage so much was because the Gospel reading for Sunday was the story of the Magi paying homage to the child-king (Matthew 2:1-12.) So I was in my office working on this sermon when a parishioner, Jean Wu, came to drop something off and asked, “Can I tell you a story?”

We sat down and she began:

I was immediately distracted by what was the most important thing she could tell me. I thought, “Wait, there’s a fortune cookie factory??? In Sacramento!!!”

I pulled myself away from my wandering brain as she continued,

“I went to the fire station and knocked. The firefighters welcomed me in. I knew many of them because I have been doing this for years. I gave them the cookies. We chatted. Then I said, ‘We prayed for you today. At Trinity Episcopal Cathedral, we prayed for you.’ I then took out the bulletin and I read what we prayed for people who are unable to be with those they loved because they were working. After I read the prayer, they just stood there in silence for a long time. There were tears in their eyes. Then one of them spoke, ‘We can’t tell you how much that means to us. Thank you. Thank you.’ Then, when I was going to Trinity for the later service, I realized the parking attendant had been working all day and was away from her family. I told her the same thing. She said, ‘Wow! I mean . . . Wow! Thank you.”

I thanked Jean for her story and asked her if I could use it in a sermon sometime. She smiled and said yes. I didn’t realize that her story would be the perfect example of how we exercise the message of paying homage – of recognizing and acknowledging the people who are serving and blessing us every day.

Jean’s story is a perfect example of everyday evangelism – one Christian sharing Christ’s love with others. It is easy for me to do this at Burning Man, because everybody is giving gifts and sharing love. But Jean showed me what it looks like in the Default World. It is a great model of how we can live in a way that looks more like Jesus. Thank you Jean. Wow.