Burning Man is has a gifting economy. Everything is a gift, freely given. Camps offer experiences as free gifts, and people offer all kinds of things. For my first Burn in 2015 I created a blessing that I could offer strangers. I needed it to have integrity and reflect me, who I was as a priest on the Playa, but also be readily received by as many people as possible, inclduing those who had been wounded by toxic Christianity. Here it is:

The world now
is too dangerous
and too beautiful
for anything but love.

And may your heart be so opened,
so set on fire
that your love,

It was amazing to be in an environment where I could go up to a stranger and ask, "can I bless you?" and they would expectantly say "yes." They of course never knew if it was something funny or deep - at Burning Man anything could be considered a "blessing." And I mean anything.  After getting consent to touch them, I would put my hands on their shoulders, look in their eyes, take a breath and say, "The world now . . ." After the opening line, their countenance would change. They would prepare themselves to receive something important. I would touch next to their eyes, ears, lips, and hands, then stoop down and kiss their feet. For the last line I would put my thumb on their sternum and press hard. It was always a moving exchange.

I did it a fair amount my first year, but not as much as I thought I would. Each exchange took more energy than I had anticipated. I needed time to reset. I also learned that there were times that were more appropriate, when people would be more open. Sunrise was good. Evening, when people were getting ready to party for the night, was not.

After each Burn I get the opportunity to bring some of the Burning Man world alive for my congregation. Here are the sermons I preached after my first few Burns.

I left the 2015 Burn early, on Saturday, so I could get back to church for Sunday. Which meant I prepared this sermon while riding back to Sacramento, dusty and dirty, on my motorcycle. I basically told stories of my experience. The sermon immediately went viral among burners because they now had something they could show their mothers that explained why they went. The popularity of the sermon made it possible for me to connect with other Episcopalians and to connect with the wider Burning Man community. (I'm embarrassed by the length of the sermon. Normally I preach for 15-20 minutes. But I had so much to say. And the people seemed to not mind. That set a pattern for all of my post Burning Man sermons.)

Welcome Home – A Reflection on Burning Man from Trinity Cathedral on Vimeo.

In year 3, I set up a prototype Camp Religious AF. It was a camp of one. This sermon tells the story of that fledgling attempt. It also has my favorite opening line for a sermon: "Do you use cannabis."

In the summer of 2018 I moved to L.A. and became the Interim Rector at St. Ambrose Church in Claremont. I hadn't yet dialed in the video recording equipment, so this is an audio sermon recorded on my phone. This sermon reflects on the first year of our camp, Religious As Fuck. 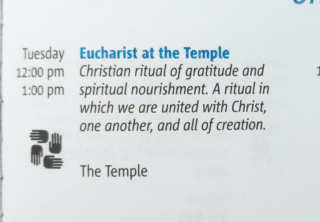 Above are just some of the activities listed for noon on Tuesday at Burning Man. We had four Temple services. Tuesday was our first. We were expecting 15 or so people to come to the service. With all that goes on, and the difficulty of communicating events and getting anywhere on time, 15 is a really good turnout. It was what we had the previous year - our first year as a camp. 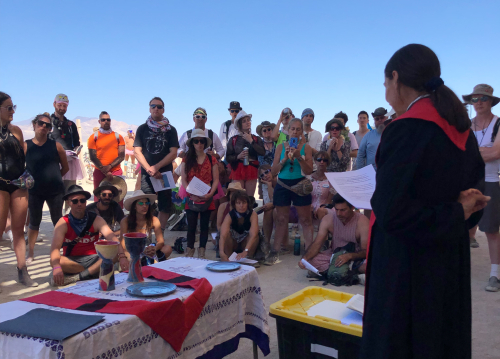 This year we had over 70. We didn't plan for that many. The service was structured like a regular Sunday service with readings, sermon, prayers and communion. Except we added a time after the prayers for people to come forward for individual prayers and a blessing. That made sense when we were expecting 15 people and not all would come forward. But we had over 70. And they all came forward. And lingered. They wanted real prayer. Real blessing. No drive by platitudes. There were tears. And hugs.

It was terrible. While the Holy Spirit was all over it, I was an anxious mess. It was taking way too long. We were in the heat of the day with no seating, and this part of the service, which was supposed to be short was going on, and on, and on, and on.

Nobody left. Nobody got their blessing and walked away. They all stayed. And were present to each other.

During this prayer/blessing time, we were singing a Taize chant. Over and over and over again. My sister, Michelle, who was helping to lead the chant realize we hadn't planned music to cover a long period of time. That's when Lauren appeared. She was a recently baptized, Episcopal, professional opera singer and virgin Burner who was thrilled to learn we were having the service.   She asked Michelle if she could join her, and then she stepped up. It was spectacular. Lauren became an active part of all of our services and would come to the chapel at our camp to practice and warm up for performances.

When the blessing part was over, we went straight into the communion service.  At the transition to communion, everybody stayed. And after the Great Thanksgiving, people came up for communion and then stayed for the final blessing. 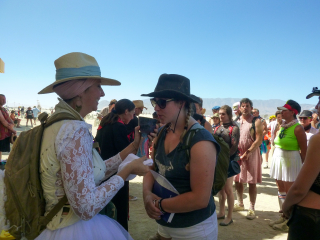 It was a breathtaking start to a rich and full week of worship, prayer, blessing and conversation. And things just got better as the week progressed.

This stunning 18 minute film does a remarkable job of capturing the magic of Burning Man.

For ten years now, a couple of Yoga studios have asked me to teach at their 200 and 300 Yoga teacher trainings.  Here is my November 2019 talk at Just Be Yoga's teacher training in Walnut Creek. This talks focuses on moving from judgement to love/forgiveness and from fear to hope.