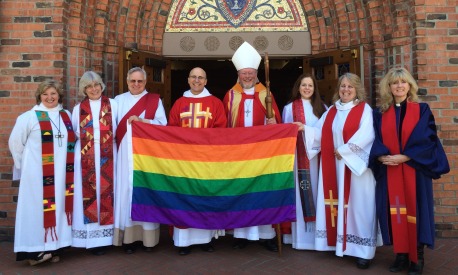 I first attended church when I was a West Point cadet in 1980. I started going to earn points with my girlfriend, who is now my wife. Though initially reluctant to hear the message, several months in I was overwhelmed with the knowledge that God is love and I became hooked on Jesus. After graduation I started attending an Episcopal Church - which was Andrea’s denomination. I loved the combination of traditional liturgy and progressive, justice oriented theology.

Several years in, I began to wonder if I could really be a Christian. I was grooving on Jesus and enjoyed the puzzle of the Bible, but was concerned about messages I kept hearing, like “if you weren’t a Christian you would burn in hell for eternity.” That didn’t fit my image of God as love. I decided to go to seminary, in part to learn, from the source what I had to believe to belong to this religion. If it fit what I believed about a loving God, I would give my life to it, if it didn’t I would move on to a different religion. I needed to know if I was on the right path.

As it turns out, the Episcopal Church was far more open than I had ever imagined.  A few years into my priesthood I realized I not only found my spiritual home, but my vocational home as well.

I am now nearing retirement after almost 30 years of serving in Hawaii, Idaho, California and now Kentucky. I have done amazing things in the church at almost every level of leadership. I ran a Cathedral in Sacramento and grew a congregation and built a church building in Sun Valley, Idaho. I served on the Executive Council of the Episcopal Church. After 15 years of LGBTQ advocacy at the denominational level, I led the committee responsible for guiding the church into full marriage equality in 2015.

In 2018 my wife, Andrea, transitioned into full-time ministry as an Army chaplain. We are now moving every few years with her work. When she was transferred to Ft. Knox, KY, we were delighted to learn that the Episcopal Church, in Elizabethtown, KY, was in need of a part-time priest. I was looking to work in a church but wanted time to devote to my Burning Man and yoga ministries. It is a match made in heaven.

In addition to leading my congregation, I devote my time to my ministry to the Burning Man community and speaking on Christian spirituality in yoga studios and other venues. I also do some speaker coaching and workshops for church vestries.

And then suddenly podcast: The story of my conversion and entrance into LGBTQ advocacy