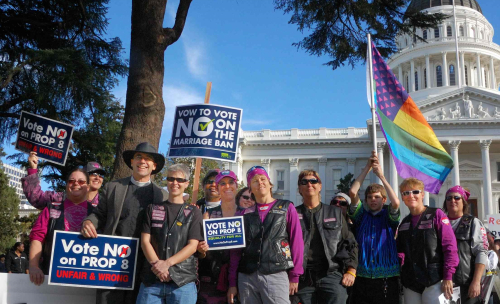 I grew up in a military family, went to West Point, served in the Army and then attended one of the only Episcopal seminaries that had a policy against gay people attending. Consequently, I was ordained at 29 years-old, never, to my knowledge having met an out gay or lesbian person. Not only that, I was aware of the verses in the Bible that were used to condemn people who were gay or lesbian.

In 1991, within weeks of arriving in Hawaii for my first priest job, I met Maggie Tanis, a young clergy colleague I knew would be a good friend. I then found out she was partnered with Linda Gould. As I got to know Maggie and Linda, and Maggie's MCC church, I quickly realized that the stereotypes of LGBTQ people were wrong. I saw a holiness in their love, and in their church, that was spectacular. I then had to go back to re-examine the Bible. Over time I began to see how we have read an anti-gay bias into the Bible. That awareness took years.  What did not take years was the realization that gay individuals were beloved children of God and their relationships were as holy as opposite-sex relationships.

I began my LGBTQ advocacy in 1991 through my preaching, marching in Gay Pride parades and testifying in the Hawaii state legislature.  When I moved to Boise I served on a political action committee and testified in the state legislature.  This advocacy continued throughout my ministry and included fighting for marriage equality in California as the dean of the Episcopal cathedral in Sacramento, the state capital. I was honored to chair the committee at the Episcopal General Convention in 2015 that led the church into full marriage equality by changing church canons and authorizing two different marriage rites that can be used for all couples.

One of the biggest challenges for me in this journey was reconciling what my heart was telling me about the value of LGBTQ persons and the condemnation I was taught to see in scripture. As a Christian the Bible is very important to me - it is the source of my Christian theology and central to my spiritual practice.  It took years of study for me to see that using the Bible to condemn people who were gay or lesbian was a misuse of scripture.

I created a class on the Bible I called "Jesus and the Gays."

I also created a page with resources on same sex marriage in the Episcopal Church.

While most of the Episcopal Church has embraced marriage equality and LGBTQ rights and inclusion, I realize that Christians in other denominations are still struggling with this issue. I relish the opportunity to help people understand how I as a faithful Christian who is committed to honoring the wisdom of the Bible can be an advocate for full inclusion of people who are LGBTQ.