Can you be a Christian and practice yoga? What does yoga have to teach Christians? How can Christian spirituality inform yogis?  These are the questions that led me to be invited into yoga studios to teach, not asana (the poses) but dharma (wisdom.) I teach in 200 & 300 hour yoga teacher training programs, give public talks in studios and lead retreats. Here are some of the topics I teach:

Transforming the world through love: this talk/retreat focuses on cultivating a heart of love and compassion in a world driven by fear and judgement. This talk relies primarily on what I have learned from Christianity on love, forgiveness, hope and oneness, but also weaves in teachings from Buddhism and yoga.

Jesus for the rest of us: Many people have experienced Christianity as a religion of judgement and hate, which is a far cry from the teachings of Jesus. This talk/retreat presents a Christian worldview founded on a belief, as stated in the Bible, that God is love. Traditional religious language is wrested from the hands of a judgemental religion and given new life - or as I would argue, given the meaning held by Jesus and the earliest Christians. The response given after this class is often, “Thank you for giving Jesus back to me.”

Jesus and the gays: The Bible is being terribly misused to teach that gay and lesbian relationships are not holy. This talk explores this misuse and offers a way of seeing such relationships as faithful and holy.

Spiritual practice for everyday life: I am terribly undisciplined. I have a hard time sticking with a spiritual practice. And, like most people, my life is overwhelmed with activity. And email. This

How I got here: My story of Yoga and Buddhism

Around 2000, while living in Sun Valley, Idaho, I learned yoga from Pilar Tumulo, a devout Tibetan Buddhist. Pilar and I would meditate together and teach each other about our 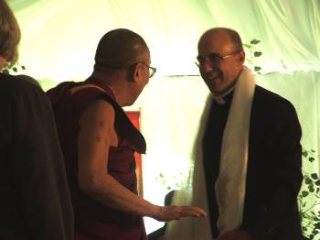 faith traditions. This led to years of dialogue and teaching with Buddhist monks.  2005 I was asked to facilitate a conversation between religious leaders in Idaho and the Dalai Lama. Later I was invited to attend the International Buddhist Conclave in India and was featured in a documentary on the Buddhist notion of emptiness.

After I moved to Sacramento in 2006, Zuda Yoga Studio invited me and Lama Marut, their guru, to hold an interfaith dialogue. They then asked me to speak to students in their 200 hour yoga teacher training program about Christianity and yoga. I was given two hours to talk about Christian spirituality. That grew to an annual invitation and then to public talks both inside and outside studios. I’ve taught at Wanderlust and the Sun Valley Wellness festival.  For a year I partnered with a Buddhist friend and we created a regular “yoga church” experience that combined yoga with meditation, chanting, prayer and scripture that we called holyasana.

I now live in Kentucky but have retained a relationship with Just Be Yoga in Danville & Walnut Creek, California, as well as the Luminary Farm retreat center near Danville.  With a less intense work schedule, I am looking more more opportunities to speak and teach in studios.